Miles — 2 years, 8 months ago
Out of curiosity, I recently spent some time (maybe too much time) taking measurements of my software renderer, DIWide. I compiled it with different compilers, at different optimization levels, running different code paths, and measured the speed of the generated code, as well as the size of the resulting executable and the time it took to compile.

The program in question has a complex inner loop with many small functions to inline, a wealth of common subexpressions and loop-invariant calculations to hoist out, a healthy mix of integer and floating point calculations, and a variety of memory access patterns and different kinds of instructions to schedule. For this reason, I consider it a good code sample for testing the compiler's overall capabilities, or at least better than a series of microbenchmarks.


One of the main things I wanted to test was the impact of different abstractions on code generation with SIMD intrinsics. Using SIMD intrinsics directly in code is verbose, and is not easy to map back onto its scalar equivalent, which makes it comparatively difficult to read and write. This isn't a big deal for small and simple functions, but becomes a hassle with long, complex passages of SIMD code.

One way to improve readability is to wrap intrinsics in convenience functions with shorter names. This cuts down on line noise somewhat, but it's still difficult to map back to scalar code. Wrapping SIMD primitives in structs and writing operator overloads solves this problem, making most of the code look almost identical to its scalar equivalent. However, I wasn't sure exactly what performance impact it would have, so I wrote three different versions of the rasterization loop to compare.

SSE2 rasterizer v1 has all intrinsics manually written directly into the body of the loop. There are relatively few high-level abstractions to optimize away:


SSE2 rasterizer v2 is the same as v1, but uses inline functions in place of frequently repeated intrinsics:

The raw data I collected can be found in text form, or as a spreadsheet. First, let's compare the code styles at various optimization levels, for each compiler: 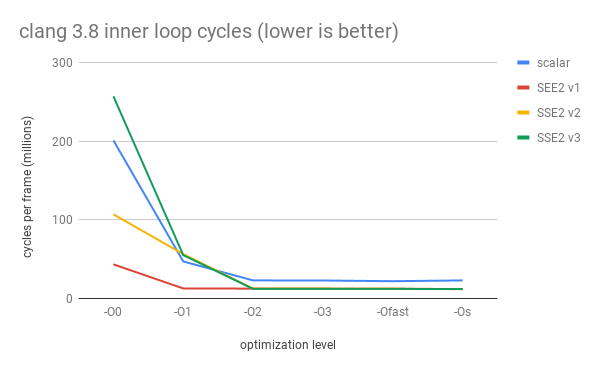 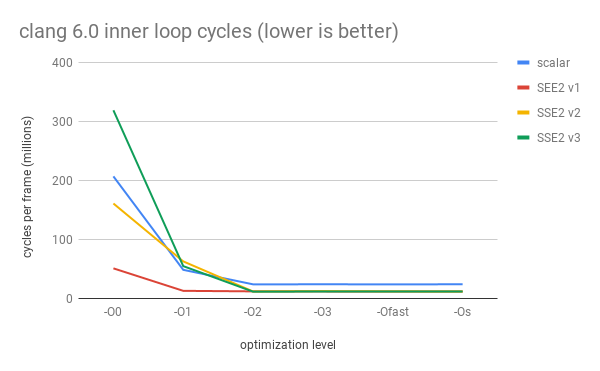 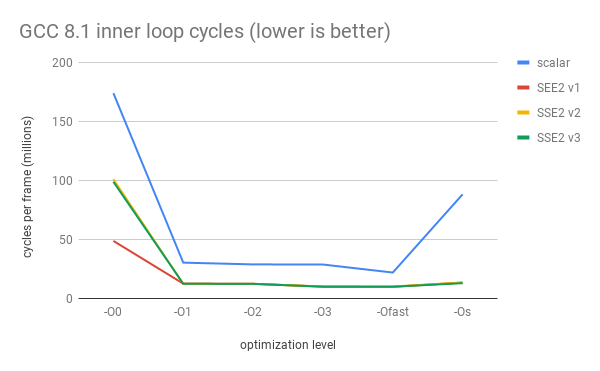 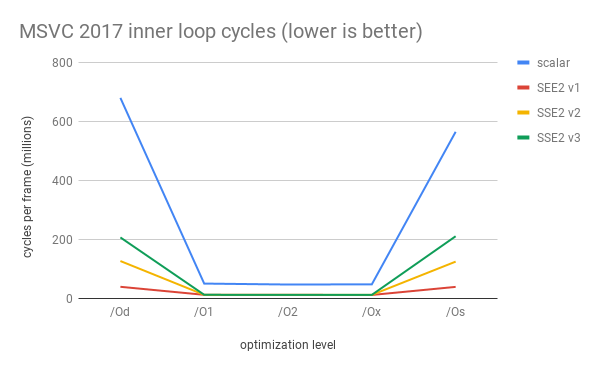 Here is part of the same data graphed in a different way, pitting the compilers against one another: 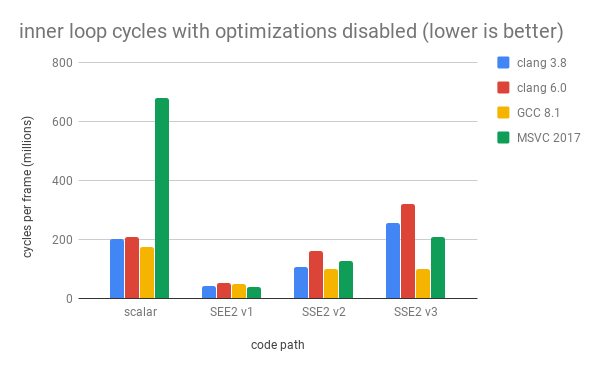 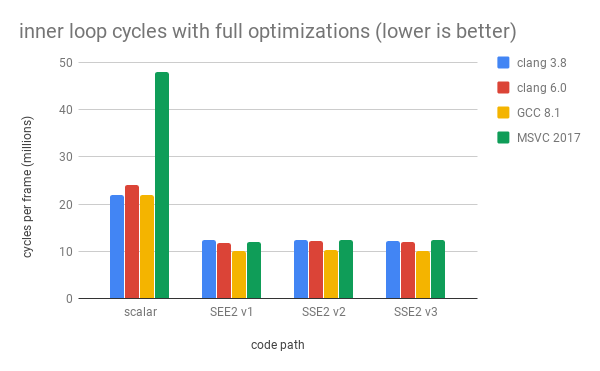 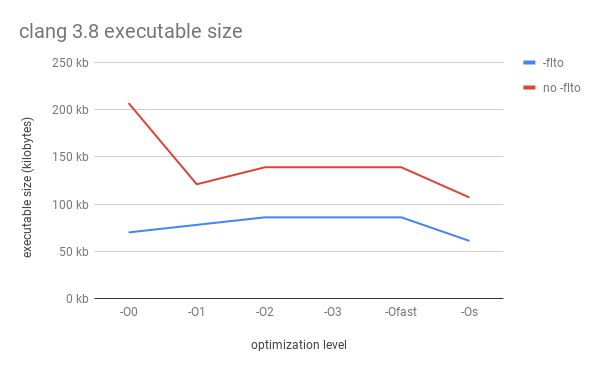 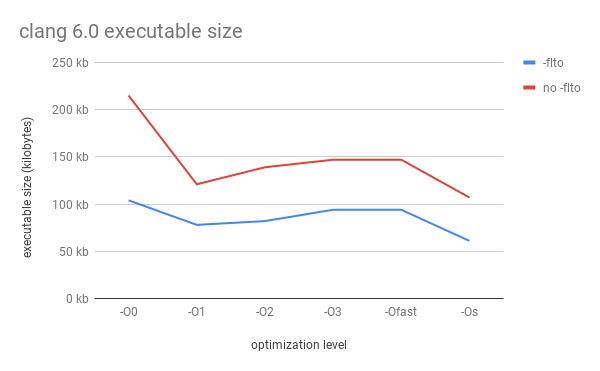 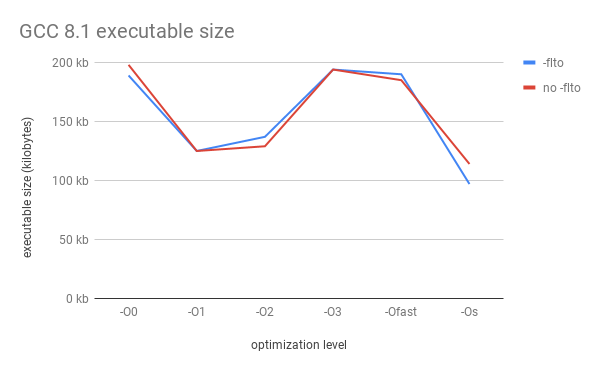 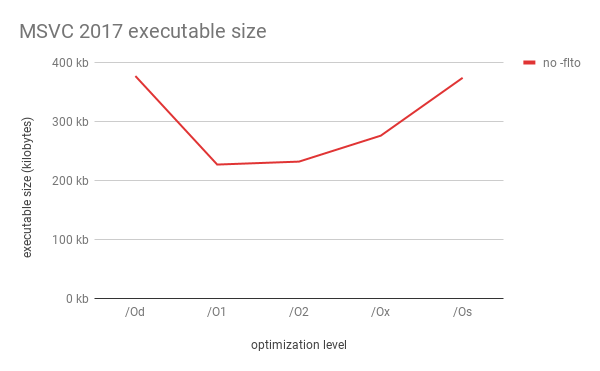 Again, here's a subset of the data shown above, but this time comparing across compilers: 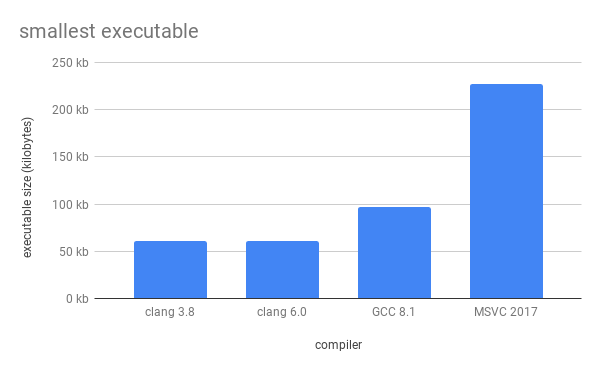 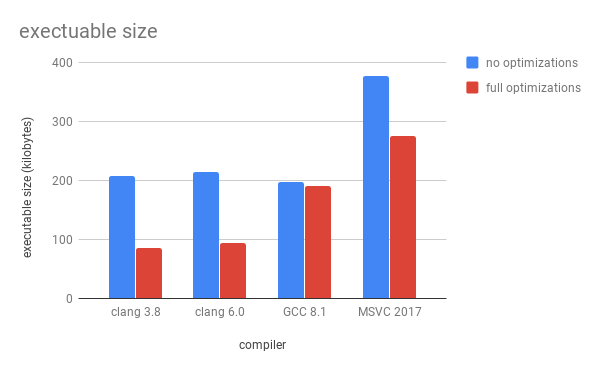 Finally, here are graphs of how long each compiler takes at various optimization levels: 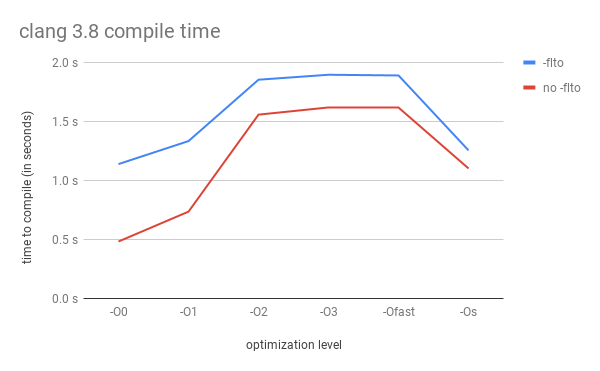 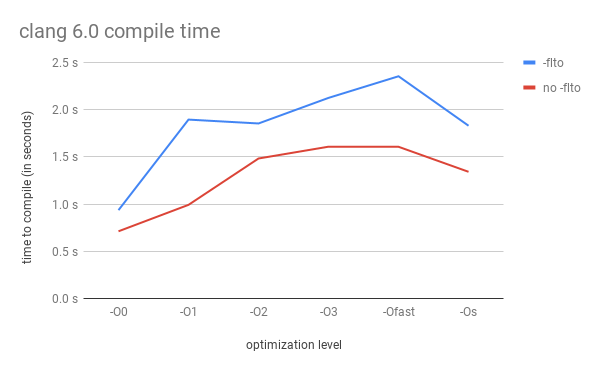 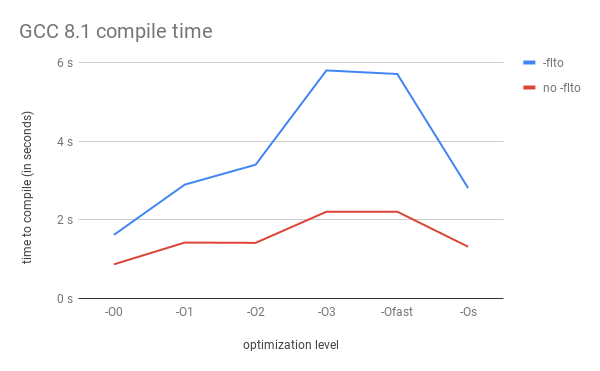 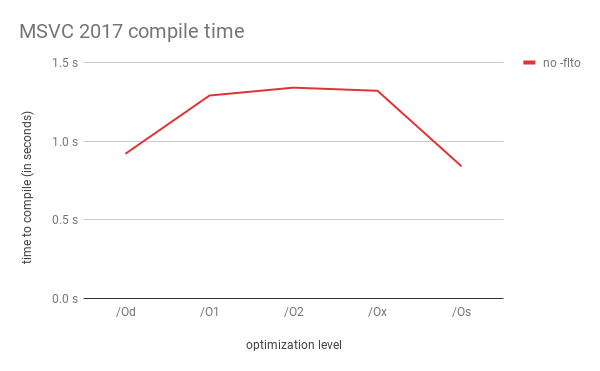 And how the compilers compare to each other: 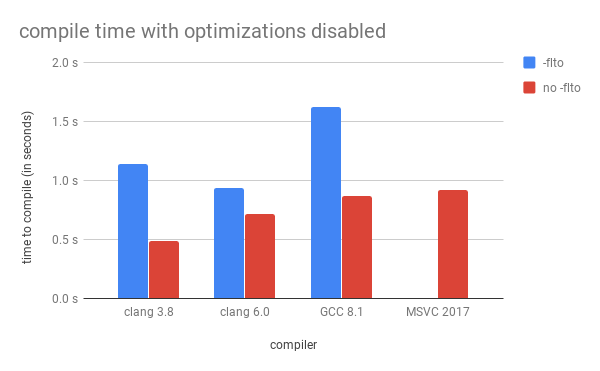 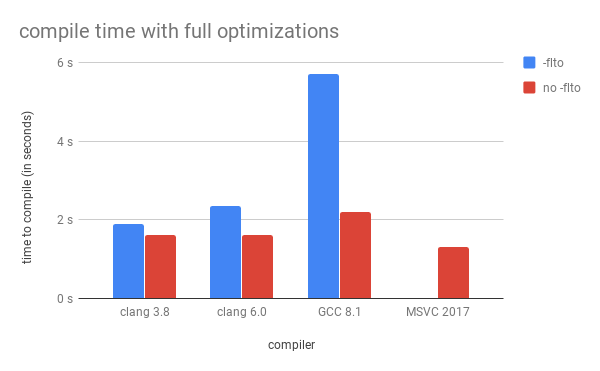 I won't waste any space commenting on anything that's already super obvious from the graphs above, but I do want to make note of a few things I observed while collecting the data.

I collected this data out of curiosity, rather than to prove any particular point, so I don't have much in the way of closing remarks. But I hope that this is interesting, and if I'm lucky, maybe even informative.
Mārtiņš Možeiko — 2 years, 8 months ago
I'm not sure it is useful to graph O0/1/2/3/s levels as line-chart. It should be bar chart, because values next to each other are not connected in meaningful way.

Try putting "static inline" next to all the add/sum/mul & operators - + * / for SSE types you wrote. Usually "static" impacts compile time a lot. And sometimes it helps optimizer to do better decisions.

Btw clang has one more optimization level: -Oz, it is based on -Os, but it excludes tree-vectorizer.

What about performance for lto vs non-lto builds? I feel like that is more important than executable size.

LTO with MSVC is super simple - just add "/GL" to compiler. That's it. You can add "/LTCG" for linker to avoid extra warning.
Miles — 2 years, 8 months ago
At least in principle, -O0 through -O3 should provide a continuum of optimization (with -Os admittedly being an outlier), but the main reason I went with line graphs is that I found them easier to read, even if they're the "wrong" type of graph for the data, and arguably a crime against statistics.

Marking functions "static" for compilation speed is a good idea. It's probably worth revisiting compile times for this project in a lot more depth. I did mark the convenience functions "inline", but not the operator overloads. For functions that small, it turned out not to make a difference on any of the compilers.

I'm not sure how clang's -Oz slipped by me. I'll see about updating the post to include it.

The reason I didn't compare performance with/without link time optimization is because, the way the program is written, there are only a few large function calls across translation unit boundaries, and the inner loop in particular (which is what's being measured) is all within the same translation unit. So it doesn't make a difference in this case.

notnullnotvoid
For functions that small, it turned out not to make a difference on any of the compilers.


Yeah, this my point - "inline" and "static" is not really about performance of generated code, but more about what compiler needs to do - maintain symbol table, export symbols for linker, etc..

Miles — 2 years, 8 months ago
When you said "sometimes it helps optimizer to do better decisions", I assumed you meant with respect to the quality of generated code. So that's why I also mentioned that aspect of it.
Log in to comment